A few months ago, I had the absolute amazing experience watching Josh Radnor speak at my university. Most of you might be saying, “Who is Josh Radnor?”. Maybe I should have said Ted Mosby? Yes, Josh Radnor is the imfamous Ted from the hit show, How I Met Your Mother. While that is his most recognizable role, that is certainly not all he should, and will, be known for.

He wasn’t a child actor and he didn’t grow up with famous parents or family members. He was just a kid from Ohio who had a passion for theatre. And it was a passion he wasn’t afraid to pursue, especially with a track record of a family that firmly stood on real jobs…and acting definitely didn’t make the cut for them.

While waiting in the insanely long line, I didn’t really know what to expect. My friends and I wondered would if he would be funny, if he was a jerk, or if would he just do jokes and, more frankly,  was he more ted than josh? These questions were put to rest from sheer moments after we all sat down, because what I experienced for the next 2 and a half hours was a real man. One that seemed unfazed by his cult following and was given the amazing opportunities to pursue his passion, make money from his passion, and ultimately be successful through his passion. He is able to travel, likes to explore untapped music, and read on his off time. And some of you may not know, but he has directed – and stared in – two movies (which are both on my queue to watch next) which give meaning and realization for life… Think “The Perks of Being a Wallflower” type of movie. Bonus: he was actually funny!

I was truly floored by how “normal’ he seemed. Josh really just wanted to have a discussion with us and talk about his experience and how we could learn from what he’s done. He spoke of living in the now and taking dream out of our vocabulary because that would mean what ever we were “dreaming” about was too far away for grasp and we need to use more active vocabulary to explain our pursuing actions. We need to give out to the world positive vibes and focus on the good things we have; not hold negative thoughts, people or media in our grasp. His words inspired me to find my passion and then pursue it wholeheartedly.

So, if you ever have the chance to see Josh Radnor speak live, do your life a favor and go. You will truly be inspired.

ON THE SUBJECT OF ME 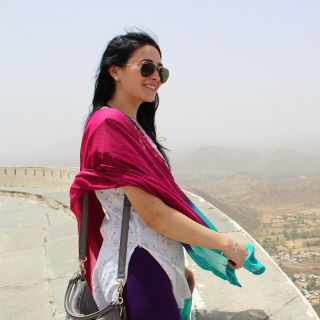 Hi everyone! I'm Steph. I've found a passion in traveling, eating great food, trying new things, and writing all about it.